Start-ups! We need to talk about the ‘C’-word

No. Not Boris Johnson.

The other ‘C’-word. Christmas. Ah, Christmas. That time of year when gifts are given, treats are tasted and, thanks to the general glowy goodness, alliteration stops being as annoying and anger-provoking as it is at alternative times in the year. Good old, Christmas.

When the snow fills the streets outside and the warm feeling inside means we’re left with wonderfully-made snowmen and couples walking hand-in-hand along wonderfully white pavements. It’s pretty much perfect

These clichéd images of Christmas are often found in movies; which tells us two things:

Anybody who’s ever been in London during the festive period will tell you that, far from gift-giving, treat-tasting and playing in the snow, Christmas is a time of asking for receipts, vomiting, and even more travel disruptions.

It’s easy to get swept into the romanticized image of Christmas and forget that people still need the same things and have the same problems then as they do the rest of the year. For a lot of start-ups, Christmas is easily the busiest time of the year. Not only is Christmas the busiest time of year, for far too many businesses, but it also proves to be the most damaging too. But it doesn’t have to be that way. There is a very simple way to deal with the pressures of Christmas. Having read the above, you’d be forgiven for thinking “REALLY?!” Well, here’s where we come in. Christmas for a business is all about finding short-term solutions to the pressures the busy schedule creates. At London Outsourced, we give you those solutions in a whole host of areas be it your customer service, your sales operations or your web chat facility. That’s not to say that there’s anything wrong with what you currently have, just that it’s unlikely to be enough to help you get the most out of the time. You might even be able to see-out the Christmas period, but amidst all of the phone calls you’ll have to answer, all the sales you’ll have to attempt, all the queries you’ll have to deal with and all the inevitable staff holidays you’ll have to manage, do you think the resources you have will be enough to maximize the profit you make? Even if the answer to that is yes, outsourcing is still a more cost-effective strategy and a sure-fire way of ensuring quality as the people answering your phones and selling your services won’t be people you’ve had to force to be there (and you don’t want to be the boss who’s hated by their employees, do you?).

Outsourcing particular tasks will help to keep your workforce fresh and increase your capacity to do things. More than that, it will allow you to change Christmas from just another period of the year to the period of the year which catapults your business’s standing, giving you a head start in the new year.

You see, all the analytics suggest that these months are the months in which you have the most interactions, get the most clicks/traffic, are in the greatest demand and, as a result, have the most opportunities. Now, while having a bad Christmas can be disastrous for so many reasons, a good Christmas can be profitable for the same reasons. Take your list of clients. It’s not an overstatement to say that your performance at Christmas can determine the number of clients you have for a whole year. At Christmas, clients tend to be looking around at the various offers in front of them – not just because they want to take advantage of potentially discounted deals but also because they are a lot busier than they usually are. Failure to deliver at this time and the only thing more certain than your fury will be the fact they’ll never look to use you again. (Well, that and the fact that Donald Trump will tweet something stupid or offensive.)

But if you deliver a quality service, not only will you retain them as a client for next Christmas, it’s more than likely that they’ll look to use your services throughout the year. It’s often said that ‘the first impression is the last impression’, but, while even that might fade over time and with amnesia, the impression at Christmas will feel as permanent and long-lasting as a can of beans.

Christmas is important. It may very well be the season that can make you jolly. 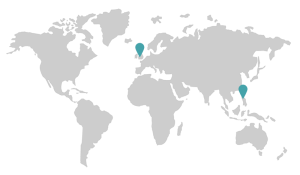